From tomorrow, Windsor Castle will be displaying Princess Eugenie’s wedding dress, tiara and evening gown, alongside other outfits worn on the day, including Jack’s morning suit, and Princess Beatrice’s maid-of-honour outfit.

The exhibition is entitled ‘A Royal Wedding: HRH Princess Eugenie and Mr Jack Brooksbank’, with its star item arguably being Eugenie’s Peter Pilotto wedding dress. Designed by the label’s own Peter Pilotto and Christopher De Vos, the team began by identifying a silhouette by looking at past royal wedding dresses. Layer by layer the dress was developed, happening over several fittings.

The dress has a neckline that folds around the shoulders to a low back, which drapes into a flowing full-length train.

The exhibition is taking place in the Grand Reception Room.

In the recording, the Princess speaks of her decision to have a low-cut back on the dress: ‘I had always wanted a low back, part of it was showing my scar.

“I believe scars tell a story about your past and your future and it’s a way of getting rid of a taboo. For me it’s a way of communicating with people who are going through either similar situations with scoliosis or having a scar of their own they are trying to deal with.”

Princess Eugenie had surgery at the age of 12 to correct scoliosis, and the scar is the result of that operation.

The fabric of the dress features symbols that are meaningful to Princess Eugenie, such as the White Rose of York, interwoven with ivy representing the couple’s marriage (they live at Ivy Cottage in Kensington Palace’s grounds). This jacquard fabric was created by the label too.

In the recording for visitors, Mr Pilotto says, “When it came to the textile…we wanted to engineer the garlands containing all the symbols that were important to Princess Eugenie, so there’s a sense of progression from small to large in a wave-like motif around the whole dress…It was all about the beautiful silhouette but yet the motif adding a sort of richness to the fabric.”

The Greville Emerald Kokoshnik Tiara is also a treat for royal and fashion fans. It lent to Eugenie by The Queen. It has never before been displayed to the public and features brilliant and rose-cut diamonds pavé set in platinum, with six emeralds on either side in the Russian kokoshnik (graduated) style.

It was made for Mrs Greville in 1919 by Boucheron and was left to Queen Elizabeth, consort of King George VI, in 1942 by Mrs Greville.

Speaking of wearing the tiara, the newly-wed said: “I’ve never worn a tiara before in my life. It was the most incredible thing to wear such a piece of history that my grandmother had lent me.”

Princess Eugenie’s diamond and emerald drop earrings, which were a wedding gift from the groom, are also on display next to the tiara. They feature seven graduated diamonds ending with a larger cabochon emerald.

The shoes worn on the day are also on display; these are satin peep-toe heels by Charlotte Olympia. With a black heel and ankle strap that leads down to a mostly-covered toe, they were a very practical choice. You can just spy them in these photos. 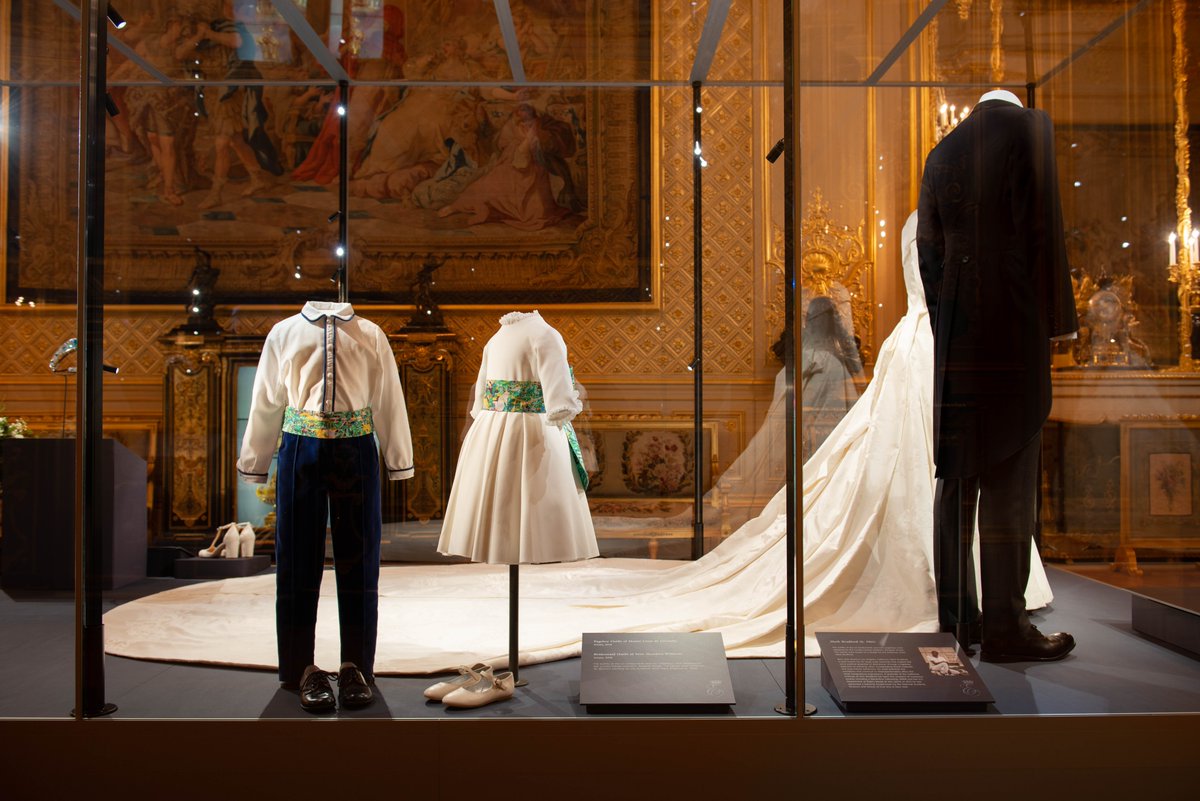 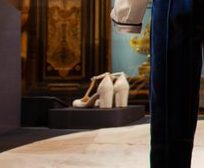 A replica of the bridal bouquet, made from artificial flowers, has been created for the exhibition. The original bouquet was designed by Rob Van Helden Floral Design, and included lily of the valley, stephanotis pips, baby-blue thistles, white spray roses, trailing ivy and sprigs of myrtle from Osborne House, as is tradition.

A sprig from the shrub was carried in the bridal bouquet of Queen Victoria’s eldest daughter, Princess Victoria, at her wedding in 1858, and the tradition has been continued by royal brides ever since. The myrtle bush at Osborne grew from a piece in the posy given to Queen Victoria by Prince Albert’s grandmother the year that the royal couple bought the house on the Isle of Wight as a family retreat.

Jack Brooksbank’s wedding outfit was a black and grey morning suit with a vivid blue waistcoat, made by tailors at Huntsman of Savile Row, London. It is displayed next to the wedding dress.

Princess Eugenie’s evening gown was created by the American designer Zac Posen. The first image below was the only look we got at this dress, so for it to be on display is fantastic.

Using the blush colour of an English rose, inspired from the beauty of Windsor Castle and the surrounding countryside, he made a silk chiffon dress with a cape. The shoulder is embroidered with the White Rose of York, gathered at the lower back and draping into a softly pleated full-length train.

Two diamond wheat-ear brooches, lent to Eugenie by The Queen, were an unexpected addition. The bride wore these in her hair during the evening.

A set of six, these once belonged to Queen Adelaide, consort of Willian IV, created for her by Rundell, Bridge and Co in 1831. They were inherited by Her Majesty in 1952, and she has worn then both hair slides and brooches. More on these pieces on our sister site, The Crown Chronicles, here. We will hopefully have HQ photos of these in a day or so.

As maid of honour, Princess Beatrice wore a blue dress by Ralph & Russo. We thought this was a skirt and jacket set initially. The asymmetric wrap fitted top has a scooped shawl collar, cinched waist belt, peplum flared hem, and fitted bracelet length sleeves. The skirt of the dress has a flirty knee-length fluted skirt. You can read our post on the original look here.

Beatrice’s pale blue shoes join the other pieces, plus her bee brooch she wore. We have little information on this, but we suspect it is a custom piece, made for the day perhaps from her parents. The gold bee is set with clear stones and green ones for its eyes.

The outfits of the six bridesmaids and two pageboys were by the London-based children’s designer Amaia Kids. The pattern on their sashes was based on a work by the American artist Mark Bradford, which was also reproduced on the Order of Service.

The exhibition includes the bridesmaid and pageboy outfits of Theodora ‘Teddy’ Williams and Louis de Givenchy. The green and blue pattern of the sash and cumberbund was inspired by Mark Bradford’s painting Here (2018); it was also printed on the back of the Order of Service for the wedding.

The Order of Service

The exhibition runs until 22nd March – get tickets here.

If you liked the royal ladies’ style seen at the royal wedding, here are some options to help you replicate royalty.