Princess Beatrice and Edo surprised the world yesterday with the news that had secretly married, after postponing their May nuptials. Tonight we got two official photos of the day, and found out those fashion details! We take a look at Beatrice’s wedding dress.

Beatrice chose a dress that belonged to her grandmother, The Queen, for her big day, having it slightly remodelled to suit her. This was a gown from the 1960s by Norman Hartnell; originally, the dress featured thick straps and a square neckline, with dark silver beading. A geometric diamond pattern at the neckline moves into simple lines slanting inwards, to the waist, then flaring outwards down the skirt. These lines end in a larger, circular detail, at the mid-thigh.

The bride had a wide band of satin added to the hem (perhaps the dress was damaged at the hem, or needed lengthening?), as well as organza puff sleeves with beads and embellishment. 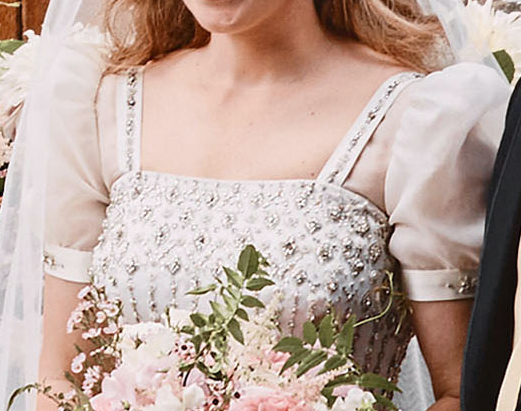 NEW PHOTOS: We have two new photos of the couple, which gives us an even better look at the gown.

Angela Kelly and Stewart Parvin – who regularly work together on Her Majesty’s wardrobe – altered the dress to fit her. Parvin also created Zara Tindall’s dress in 2011, featuring a similar satin band.

It was worn by Her Majesty in both 1962, for the world charity premiere of the film ‘Lawrence of Arabia’, and again in 1966 to the State Opening of Parliament. See the original below.

This month sees the release of series 3 of 'The Crown'. This series will take place in the 1970s, a big jump from series 2 which ended with the birth of Prince Edward in 1965. To help fill in the gaps, here is the Queen at the 1966 State Opening. #TowerRegina pic.twitter.com/hxRJleQmzb

Beatrice wore Queen Mary’s fringe tiara to hold her long veil in place; it was also worn by Princess Elizabeth on her own wedding day in 1947. The tiara was made by E. Wolff & Co. for Garrard & Co. in 1919; a kokoshnik-style piece, it consists of 47 graduated brilliant and rose-set tapering bars, separated by 46 narrower spikes.

The fringe-style piece can also be removed from its frame for use as a necklace.

We got a peek at metallic shoes underneath the dress, met at the ground with her cascading veil. We’re on the look for them now!

UPDATED: the new photo shows us better – they are her Valentino studded heels from 2011. Note the v-shaped vamp and the studded crystal embellishment.

As seen at William and Kate’s wedding:

Her wedding ring was a simple gold band, made by Shaun Leane, like her engagement ring. Edo’s was made by Josh Collins.

The bridal bouquet followed royal tradition and was taken to Westminster Abbey.

Princess Beatrice has sent the bouquet she carried at yesterday’s #royalwedding to the Abbey to rest on the Grave of the Unknown Warrior – following a tradition begun by The Queen Mother in 1923. More: https://t.co/j0M8ENbS9a pic.twitter.com/0tlz6sNtLE

We just love that Beatrice repurposed one of The Queen’s dresses, not only a sentimental decision, but an environmental one too! What did you think?