The Duchess of Cambridge stood on the balcony of the Foreign Office with The Queen Elizabeth and The Duchess of Cornwall on Remembrance Sunday, marking the centenary of the Armistice – 100 years to the hour precisely. The three royal women looked solemn and united, a powerful image of three British Queens, one current and two future. The Duchess wore Alexander McQueen for the occasion.

The Duchess of Cambridge brought a very strong and bold approach to her ensemble for the Service of Remembrance this year. Dressed in what almost appeared to be a military uniform, Catherine combined two different Alexander McQueen jackets to create the main portion of her coat. There could also be another two or three McQueen styles worked into the coat, as Kate’s coat features four flat shiny gun metal toned buttons on each cuff, as seen on such Alexander McQueen coats as the ‘Open Front Military Coat’. Also, we did not get to see a full length look at the coat so do not know how long it is to attribute the length to another McQueen design.

The base of Kate’s jacket was the Alexander McQueen ‘Military Jacket,’ see it here. The elements from this jacket that are present in Kate’s are the high sliver button at the neckline and the crossbar with fastening buttons at either end. The peaked shoulders that move into long sleeve, the split panelling at the rear of the jacket and the side peplum detailing which appear to have at least one silver button along this edge.

Some other elements were combined from the Alexander McQueen Lace Insert Jacket, see here. Such as the stand up white collar with double hook and bar closure, and red trimmed epaulettes with silver toned buttons. Two radiating diagonal darts move from the collar over the bodice on each side. This is a construction feature that we have seen on many of Kate’s recent McQueen ensembles.

Catherine chose a new hat for the occasion; a Lock & Co ‘Abney Hat’, retailing for £795. The hat is crafted for a rich felt and is a side percher with a swept up outer brim, almost as if someone has turned a cloche hat half-inside out. A delicate curled quill lies flat along the front brim edge to add that elegant touch. The Abney is available from Lock and Co online in a burgundy colour way and also leopard print.

You can purchase the hat here.

This hat is very similar to Kate’s ‘Lion Tamer’ hat from the label, but in a different fabric. We saw the ‘Lion Tamer’ during her first ever balcony appearance after her wedding day in 2011, for Trooping the Colour. In fact, the website describes the ‘Abney’ as the Autumn/Winter Version of the Lion Tamer.

Kate wore her Cassandra Goad ‘Cavolfiore Pearl Stud,’ retailing for £4,360. These earrings whilst appear to be pearl flowers are actually inspired by cauliflowers…! Each of the seven pearls are inlaid with a diamond and all set in 18K gold. These earrings were first seen for Prince Louis’ Christening.

You can purchase these earrings here. 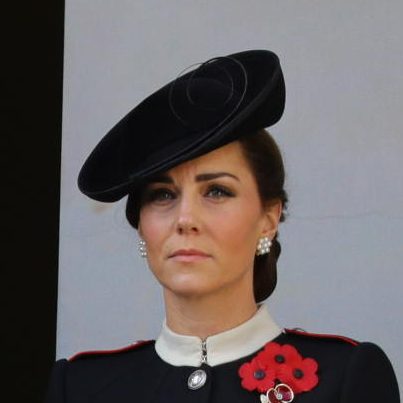 Kate also wore a pair of black gloves, though we did not get a close enough look at them. We would assume they are by Cornelia James, as the Duchess often wears gloves by this designer.

Catherine re-wore her ‘Women of The First World War Brooch’ from the Royal British Legion, retailing for £29.99. The pin made of enamel, finished in gold-toned metal, and each limited edition piece comes with the story of a woman who died in WWI as a direct result of the conflict. If you would like to pre-order this poppy in aid of you can do so here.

The Duchess wore her hair up in an intricate braided updo. A stunning look on the Duchess, she truly looked like a Queen Consort on the balcony.

Of course, we are not sure what shoes the Duchess wore, but they were certainly black. She owns a number of styles in this colour, including from Stuart Weitzman, Jimmy Choo, and Gianvito Rossi.

You can get Kate’s respectful style here: