Yesterday saw Britain mark Remembrance Sunday with a national, but scaled back, service at the Cenotaph. The Queen lead the nation in remembering the fallen from all conflicts since the First World War, and was joined by The Duchess of Cornwall and Duchess of Cambridge, as well as The Countess of Wessex and Admiral Sir Tim Lawrence on the balcony of the Foreign Office.

The Duchess wore a new military-style coat from Catherine Walker, although it feels very McQueen. It features braided epaulette detail with fringing on the shoulders, a high open collar and braided waist tabs that sit above a slanted peplum (or possibly oversized pocket flaps), going in for a real uniform feel. The buttons were mother of pearl, and the cuffs flare a little, adding a touch of softness to what could be a very masculine coat.

It was a bespoke piece for the occasion, and you can see a couple of elements in other Walker coats, but the military style is not something often seen in her work.

You’ll remember she channeled a similar look last year, with braided detailing on the front of the coat.

Catherine wore a new black velvet hat from Philip Treacy for the event, this is the ‘OC 784’ hat. With a sculpted velvet teardrop base that sits over the right eyebrow, a silk or satin mutli-loop bow is tied on the left-hand side. There is no RRP for this piece – it is price upon request, but these sorts of hats usually retail in the region of £1000-£1700.

I always think these pieces are Kate’s go-to style, as they suit her so well, and are not too in your face.

Treacy is a favourite milliner of The Duchess of Cornwall, who also wore a piece from the atelier.

Unusually, we got a peak at her bag, as she placed it on the balcony ledge. It appears Kate carried one of her McQueen clutches, in black velvet. The edges appear curved, reminding us of the one seen at the Festival of Remembrance last year, which we thought was suede at the time. 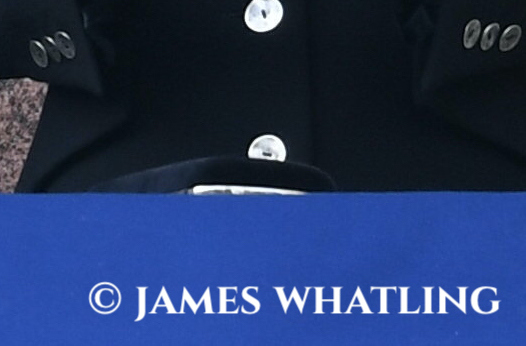 Kate wore her diamond and pearl drop earring from The Queen. They are large diamond studs with pearls attached – a real jewellery box staple and appropriate for all occasions. We show a previous outing of these below.

After the ceremony, William and Kate were seen in their car, with the Duchess wearing a textured black polka dot mask, which comes from Amaia Kids again. It is the black pluemtti style, costing £15 here. This shot also gives us a better look at that coat detailing.

Thanks to @MiddletonMaven for sharing the coat and mask ID; the Daily Mail reported on the hat’s identity