Today at Buckingham Palace, members of the Royal Family marked 50 years since The Prince of Wales was formally invested with his title in 1969 with a recpetion hosted by The Queen. The Duchess of Cambridge attended alongside The Duke of Cambridge, The Duke and Duchess of Sussex and The Princess Royal.

You can learn more about the history of the investiture on our sister site, here.

Kate chose a duck egg blue midi length dress, which we are told is from her own (anonymous) dressmaker. The piece feature a high-ruffled neck, Rouleau buttons down the front to the waistline, which then pleats to create the skirt. There are sheer balloon sleeves, puckered at the shoulder, which move into a long fitted cuff, also featuring the same buttons. We love this replikate here to steal Kate’s style.

Rolueau buttons are loops made for fastening, created of the same fabric of the dress/top etc, and is most often seen on wedding dresses today.

A close up of the neck, buttons and shoulder: 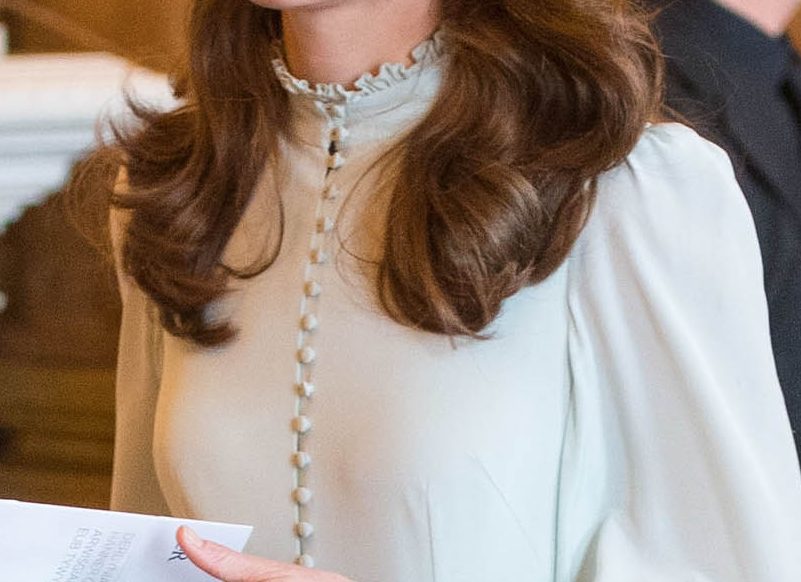 This anonymous dressmaker has been on the scene for a number of years now, and one theory is that it is Sarah Burton of Alexander McQueen, working in an independent capacity for the Duchess. In this case, we think this is correct; compare today’s dress to the one by McQueen worn to Pippa’s wedding in 2016. They feature the same cuffs, length hem, puffed shoulders (a feature Kate loves on her McQueen outfits).

UPDATE: a reader over at What Kate Wore noted the similarity of Kate’s dress today with one from Ulyana Sergeenko. If this is the same designer, then I suspect there could be a Russian visit on the horizon…

An interesting comment from Rosie on today's post points out the similarities between Kate's private dressmaker frock & an Ulyana Sergeenko style. pic.twitter.com/RmbAh5I14y

We really like this piece on the Duchess today, but pretty much every royal fashion watcher thought it was Catherine’s ‘Sabitri’ Beulah dress seen on the South East Asia tour in 2012, so similar is the piece. Again, we question why she has so many pieces that have *very* similar – almost identical – features, especially in the same colour!

Kate teamed the dress with a pair of pointed heels from Emmy, a designer we haven’t seen too much of from recently. These were the ‘Rebecca’ heel in blush suede, featuring a 4.5 inch heel. They cost £425 and are available here.

The bag Catherine carried we first saw at Trooping the Colour in June 2018; it is a shell clutch with silver hardware from Alexander McQueen, in a printed/textured baby blue satin. The clasp is a butterfly atop a large clear (or possibly pale blue) stone, surrounded by smaller stones. We would love to see more details of this piece at another engagement, perhaps an black tie reception.

The Duchess of Cambridge wore one of her unidentified pairs of earrings for the reception. These are diamond and aquamarine drops; diamonds create the drop from a stud, and the coloured pear drop stone is surrounded by clear stones. Here are our two ways to copy Kate’s look here and here.

Incidentally, Kate wore these with the same Beulah dress mentioned above. 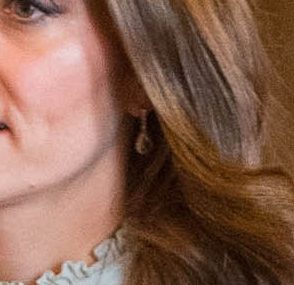 We will update with better pictures when we have access to them.

For now, you can replikate this look here:

Thanks to Middleton Maven for the shoe ID